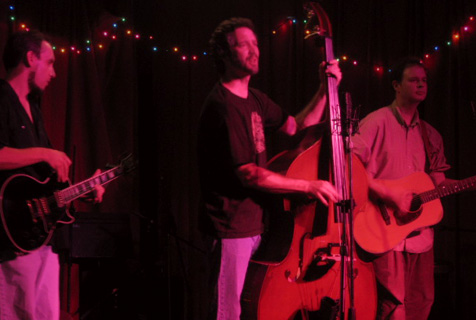 By mid-2004, the Coats realized they couldn’t keep “demon” electricity down indefinitely. A line-up change produced the first Coats “power trio.” Sporting upright bass, acoustic and electric guitars (and, the occasional ukulele), the new “blend” took Prog / Trad up a notch. 2004 alone produced a double album’s worth of new material, while 2005 saw the addition of new regular venues: The Red Light and Decatur CD. It was once said of the Coats, “who else can play The Carter Family and The Pixies in the same set?” No one but the Coats during the “Blendo Years” had that kind of gumption. And what gumption it was.